The history of our farm

Kotimuna Oy is originally Heikola Farm in Alastaro, in current Loimaa. Although Heikola farm has grown together with our company, the farming traditions are still alive. Farm has had chickens for as long as we know. The first document entries are dated from the 1800s.

In the 1930s there were Sulho and Martta Heikola, who had a farm with many different animals, and a chicken house with a heating system of Sulho’s own. Unfortunately, he lost his life in the war in 1940, and Martta had to continue. She managed well with a farm and four daughters.

Today, we have four young daughters, and the youngest one is a small pepper called Martta.

In the 1960s Sulho’s parents Hertta (born Heikola) and Aaro Lehto established a hen house for breeding and a hatchery of chicken. In 1988 Sulho bought the farm from his parents. He abandoned with the hatchery business and concentrated on egg production only.

In the late 1990s we started to expand the egg production space. Throughout the 2000s, we have invested in modern production buildings. Since 2005 Kotimuna Oy has produced eggs in two places: at Heikola farm and 14 km away in Orisuo.

In the year 2005 and 2008 the first aviary system barn houses were finalized in Orisuo.

The year 2010 is a new milestone in the history of our farm, when all of the approximately 100 000 birds are living as free in an aviary system in five different hen houses.

Today, our farm employs 6 persons on a daily basis. 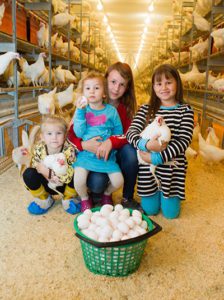